My new computer has finally arrived and last weekend I had time to put it together. With the Fedora 10 release this week I should be having a good time now. Here is what I got:
I tried to order things which save a little bit of power and are easier to cool so I can run them quieter. I also decided on a ATI graphics card because they are releasing information about their hardware and are not stuck in the past like Nvidia.

So I cleaned my old computer case, removed the dust from the last five years which required me to take it apart and put the new stuff inside. I first tried it with my old hard disks and Fedora 9, because 10 had not arrived yet.

The computer started and everything was nice and fast and shiny. But after a few reboots the only thing I got was beeeeep - beep beep beep. After a trip on the internet I found out that I picked one of the motherboard + graphic card combinations which don't seem to work. So now I am running with a borrowed Nvidia card until I buy a new motherboard or Asus comes up with a new BIOS.

I obviously also contacted Asus and Sapphire support, but it just confirmed my opinion that this is completely pointless. Asus answer was along the lines of "Have you tried turning it off and on again?" and Sapphire did not even bother.

But I still had Fedora 10 to look forward too. And so I installed it on the new hard disks. It is pretty much the same, but maybe I am just difficult to please. Here are some short notes:
To NetworkManagers defence I must say that it is very nice on my Eee PC, I just don't see the point on a desktop / workstation. The Eee PC is still downloading with preupgrade, so lets see how that goes.

Next hardware upgrades are for the firewall, backup server and htpc, which are all from 2002. I can mostly use hardware I already have and just get new cases and fans so that they stop sounding like a fighter jets landing. And I obviously have the spare M3A32 too, so that gets a Athlon X2 and goes into the htpc. Hardware can be so much fun ...

Oh ... and I am probably the last person arriving in multi core and 64 bit country. nice.
Posted by Christof Damian at 20:12 No comments:

api.bicingwatch.com has now been up for two weeks. It is a small site with just a handful of html views and some JSON views.

I also use python now to scrape the bicing.com website and store the results in a mysql database. This does not include the data I had already collected over the last year, which I will import soon.

Today I also enabled disqus commenting on the station pages. I originally planned to write this myself, but this is way quicker and I can always change to the django commenting system later.

Overall I am very happy with python and pretty used to the syntax now. I really like the internal dicts and arrays, much better than the php version and on the same level as Perl. I also like the way errors are handled, which is always with exceptions. In Perl and PHP these are very much optional and are not used a lot.

What I don't like is the quality of some of the libraries, they clearly have to do some catching up to do with CPAN.
Posted by Christof Damian at 09:06 No comments:

Because my last restaurant review was so successful here is another one. It was also mentioned on the Python Meetup that it is a bit difficult to find good restaurants in Barcelona, because most of them are mediocre, especially for the lunch menu.

I have been there now four times and the food was always good and the service excellent. The lunch menu is very good value for money. For about 10 Euro you get a good sized starter, a main, dessert and a soft drink or wine.

Today I had tempura as a starter, which was very fresh and crispy. Other choices are gyoza style dumplings, korean tortilla, sea weed or miso soup. There is also always a complimentary serving of kim chi, pickled cucumbers and pancakes.

For mains I had spicy Korean beef with rice. In the evening you can get this and other courses also prepared on a barbecue, which is in the middle of each table. For this it is the best to order a few different items and share them between your group as you can always just put one onto the grill. Other options are sushi, noodles and tofu.

I usually don't take dessert but the rice sweets and fried honey bananas are good and my friends seem to like the ice too.

Altogether a very nice experience, all the food is fresh and the service is very friendly.
Posted by Christof Damian at 21:05 No comments: 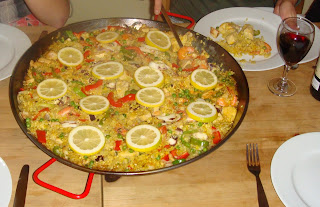 This is my recipe for paella. The picture was the most recent one I made. It was not perfect because it is my largest pan and it gets a bit difficult. I used two other recipes I found on-line and combined them.
Heat a paella or other big flat pan. Add olive oil and fry chicken for 2-3 minutes. Push to the side of the pan, add onions and fry until golden. Season with salt and pepper, but not too much as the stock is probably seasoned too.
Push everything to the side and put rice in the middle and coat it with olive oil until all of the rice is coated. Add most of the chicken stock, mix everything and cook for 10 minutes. Add vegetables and seafood and mix again. Crush the saffron and add it to the remaining stock, this also goes into the pan. Leave to simmer and add wine and water if it gets to dry. Serve with lemons slices and parsley on top.

The whole thing takes maybe half an hour, but you have to make sure that the rice does not burn or get too soggy.

If you want to go fancy you can fry some chicken legs and fresh prawns or crayfish and put them on top at the end.
Posted by Christof Damian at 18:41 No comments:

A clean desk is the sign of a sick mind! 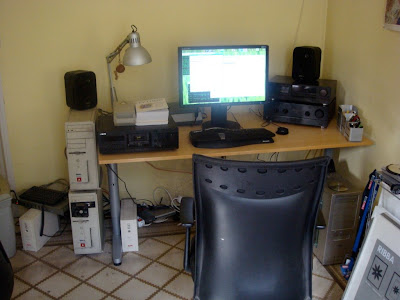 My current home office setup. The newest addition is the Samsung 245b 24" 1920x1200 TFT display. It is probably not the best one around, but is pretty good for the stuff which I do, which is mostly programming.

The main computer is an old Athlon XP 2400. I am currently waiting for replacement parts. I brought most of the stuff with me from London, which means it is from 2003 or older. At the moment the machine is running Fedora 9, but will be upgraded to Fedora 10 once it is out and the parts arrive. I think the Natural Ergonomic Keyboard 4000 is the only Microsoft product I use. It is the UK version, because I can't get used to the local versions. The mouse is a Logitech G9, just upgraded from a G5. I am not sure about the G9 just yet, the previous mouse somehow feels better in my hand.

I also got two old Dell Dimension XPS B600r. One of them is used as firewall and the other one as backup server. You can see in the picture that the backup server has a front mounted fan, otherwise the three disks stop working. Both of these computers run CentOS 5.

The computers and router are protected by APC UPS, because we have a lot of power problems here in Barcelona. In the cable jungle next to them is also the ADSL router, a KVM switch and a network switch.

Behind the monitor is also an old scanner to scan old photos and just off the picture to the right is a HP OfficeJet scanner/fax/printer combo.

The Sony TC-KA6ES tape deck is currently broken and I am trying to fix it. While this is not working I am using the Technics tape deck, the amplifier and the two JBL Control Ones to digitize my tapes with the tape recording software I am currently writing in python.
Posted by Christof Damian at 23:26 No comments:

The free world has a new leader (elect)

I am glad about the result and this shows that the USA can be a leader in democracy. My guess is that will take a long time until we see a president in a European country who is not white.

The news also speak about the amazing high turnout in this election. This might be high for the US, but does not seem so high for the rest of the world.

I also wonder what this election will change. I would love to see Americans loose some of their security paranoia and open up again.
Posted by Christof Damian at 09:32 No comments:

Email ThisBlogThis!Share to TwitterShare to FacebookShare to Pinterest
Labels: news