This year I am doing the updates every four months and April is nearly over, so here it goes. 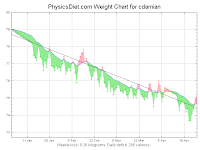 1. Loose weight: going very well. I dropped from an average weight of 79 to 74.7kg and moved from "overweight" to "normal weight" BMI category. I didn't my lifestyle too much, I just eat and snack a bit less. One big helper has been the physics diet website, which keeps a nice average graph and helps me to stay motivated. I just have to go another 1.7kg to reach my goal for the year.

2. Reduce time spend watching TV, reading e-mails, blogs, facebook and twitter. I reduced the number of RSS feeds from 600 to 479 and the posts I read per day from 365 to 240 (including tweets). And I spend less time on each post, as I use readitlater to mark interesting posts and read them when I have time for it. I also stopped watching a few TV shows and stopped using facebook. Overall I notice that I have more time and I am sure I can do a bit more in the next eight months. Using GTD more also helped with my time management.

3. Do something about my so called "career". This could mean doing something more fun, working less and/or earning more money. As mentioned in the previous post, I have decided to go for something more fun with a job at softonic. I will judge how it turned out in the coming months. For some reason I seem to have too many choices at the moment.

Maybe I should have chosen more goals, but the success so far seems to be an indicator that it is good to concentrate on a few. Next update will be at the end of August.

Some left overs from last year, which I worked on this year too:

Posted by Christof Damian at 15:01 No comments:

This week I started my new job at Softonic.

After three years at opus5 I decided that it was time to move on. I learned a lot in this time and as I like to say, a lot of things I really never wanted to learn. I worked in a great team and wish them all the luck for the future (And in case you are looking for a PHP job, I am sure they are looking for more people).

While writing my 2010 New Year's Resolutions, I came to the conclusion that it is finally time to make a move. I was looking for a company, which is more focused on development and the possibility to learn new stuff.

Most people reading this have probably never heard of Softonic, neither had I before the 2008 Barcelona PHP conference. It is a large download portal similar to download.com, which started in Spain and is now in many other countries. The company has 180 employees, with maybe about 50 developers. This makes it the biggest company I worked for so far. They have been voted best employer in Spain twice and provide nice perks like training, massages, free fruits, tea and the like.

A few things made the decision to change more difficult. I now earn a lot less and I can't call myself Technical Director any more. In fact I am not even any kind of team lead, but just a low developer. But I figured I wanted to do more programming and hope there will be opportunities to grow in the future.  And I have to work on Windows again with two tiny screens, which is a bit strange.

Technology used at Softonic is pretty standard, the usual PHP, MySQL and memcached that you see everywhere. They have their own grown framework, which is not to different from what I have worked on at Sanego or guideguide. Some of the processes are a bit strange, for example the revision control system involves Windows, remote X11, Wine and TortoiseSVN. But nothing I can't work around with a bit of Eclipse, git and shell magic.

The first week I spend shaking everyone's hand (really), learn some of the processes, sign contracts, listen to CEO talks. I need to find some good lunch restaurants in the area, which is a bit more difficult then in the centre of Barcelona. I also have to find a way to store my bicycle to work.

For some reason I ended up in the SEO team (opus5 guys will laugh now :-), but in the end it is all just code and I might not be interested in SEO, but neither do I use any download portal. At the moment I don't do any coding anyway, I am still in training and this probably continues for a few more weeks.

So to summarize: all fine, I am having fun lets see where it takes me...
Posted by Christof Damian at 17:40 3 comments:

Katja and I spend the last few days in Marrakesh. We were looking for a cheap holiday in a not too cold country and Morocco was pretty much the only choice.

The flight to Morocco was with Ryan Air. I already knew how much I hate them, but they confirmed it again.

We stayed at a small hotel Riad Alksar in the Medina. A Riad is a house with a courtyard and the rooms build around it. It doesn't have any large windows to the outside. The area of the hotel is pretty poor with the exception of a handful of similar hotels. The hotel has eight rooms and each of these would usually house a family. Our host was very nice and the hotel clean and with a minimal design. One of the perks is the roof terrace, which we used a lot to chill and for breakfast.

Because we didn't have too much time, we spend most of it shopping in the Souks, visiting a few of the palaces and enjoying the food market at night. The food was very good and I can only recommend it to everyone.

The most amazing thing was how friendly everyone is in Marrakesh. You get hassled once in a while by people trying to sell you various rubbish, but they leave you alone after you said "no" twice. Everyone was helpful and I never felt like I should have to worry about pick pockets or similar. Very different from the situation in Barcelona.

But pictures speak more than a thousand words, so have a look...

Posted by Christof Damian at 17:05 No comments: