Now that another decade comes to an end, it is time for me to see if the ten years really were worth the effort. Overall it seems to have been more pain than was strictly necessary.

2000 - it all started quite nice. I just turned 30 and was living in London, just got together with my girlfriend and working for guideguide a very nice start-up which was going quite well at the time. One highlight of the year was a trip to OSCON in California, where I witnessed the beginning of Perl6, which seemed brilliant at the time and now appears a bit pointless.

2001 - will always be remembered for 9/11, someone in the guideguide office heard about it over IRC and we quickly confirmed it on TV. It was also the year where I bought my first iPod, maybe the only trend I ever spotted early. Nobody at the time imagined how either 9/11 or the iPod would shape the future.

2002 - I split up from my girlfriend for a while and decided that this would be the right moment to start drinking alcohol again after ten years.

2003 - guideguide was scaling down a lot now and I had to fire lots of people, which was probably one of the most stressful episodes of my business life so far.

2004 - with not much left of the company I decided I could as well move to Barcelona and work from there. It turned out to be a lot of fun and a lot more relaxed than London. It was also the year where I got ill and fixed up again.

2006 - I quit guideguide after lots of years. It was a difficult decision, but nobody of the old gang was still around, so I didn't feel too bad. I was also looking for a local job and just being employed for a change. I used the rest of the year to chill and enjoy Barcelona.

2007 - Found a new job at opus5, learned lots of new stuff. For some reason the founder left after I just started, is it me ?

2009 - I decided to stop drinking again, turned out to not be my thing after all. The economy made this year really interesting and I hope it will turn up some new opportunities in the future. Oh, and I turned 40 and I am looking forward to my mid-life-crisis, but that is the topic of another post.

And finally thanks to everyone who made these years more fun then they sound:
So lets see what the next decade brings, maybe a new start and the opportunity to do completely new mistakes!

Here are some random pictures from the past ten years

Fedora now has been out for a few weeks and I can summarize my experience with it a bit.

I would have preferred the preupgrade on all machines, but I am using RAID on some of the machines and preupgrade doesn't like /root being on RAID. But the upgrade went smooth in all cases, so I don't really mind.

I also changed the graphic card in my work PC to an ATI HD3450, so I can finally use the desktop effects with an open source driver.

What works out of the box

Desktop effects on the netbook, home and work PC, with either the ATI card or Intel on-board graphic chips.

Pulseaudio with USB or bluetooth headset. I use it mainly with Skype, which is the only non open source software left on my computers (I blame peer pressure).

Automatic bug reporting for program crashes and kerneloopses. This should make the quality of future releases even better, even though bugzilla is pretty much swamped with bug reports now. But I think it is always better to have more information than less.

CPU speed scaling finally works. I had to fiddle with the BIOS settings a bit to enable Cool and Quite and some other power management settings.

What doesn't (or didn't work)

I had some problems with pulseaudio crashing after installing the ATI card, but putting a "blacklist snd-hda-codec-atihdmi" into /etc/modprobe.d/blacklist.conf fixed it. I found the fix on bugzilla.

I am still not able to play my Homeworld 2 CD with either Wine or VirtualBox, I think the drivers are still not good enough to support the OpenGL needed for the game. It also crashes after a while in VirtualBox. Radeon bugs currently hold the top spot at kerneloops, which makes a fix more likely.

If you use an Eclipse (or Azureus), which didn't come with Fedora some of the GUI buttons don't work. This is caused by a change in GTK and a workaround is to set GDK_NATIVE_WINDOWS=true before you start eclipse. This is also mentioned in bug 540956.

I bought a D-Link DWA-547 Wireless N PCI Card for the media centre in my effort to upgrade the flat to 802.11n, which I just can't get to work. It is either slow or crashes the whole machine without any way to get to the kerneloops. I probably have to find a different card to get it working. But wireless cards always have been a problem.

I am also trying to contribute more to fedora by building packages and doing package reviews. After the Barcelona PHP Conference I decided to build RPMs for the PHP QA packages by Sebastian Bergmann and others. Turns out that most of them are already available or up for review, so I applied as co-maintainer and did a package review. Remi has a good overview of PEAR packages in Fedora.

The other big project which will probably take a few more years is the odyssey of packaging symfony, this turns out to be difficult because symfony bundles a lot of libraries and they need to be separated into their own packages. The good thing is that this will bring these libraries into Fedora (and eventually EPEL) too. So far I managed to get Doctrine in and the Swift Mailer is up for review. Symfony itself won't get into EPEL, because it requires a newer PHP, but it will work with the Remi bits.

You can find a list of my packages in the Fedora package DB and also of the ones I co-maintain. Still rather short list at the moment :-)

Probably the best Fedora upgrade and usage experience I had so far. The main problem is still the hardware, the software itself works perfectly and for my usage I don't really need anything more at the moment.

Finally a rather boring screen shot of my desktop: 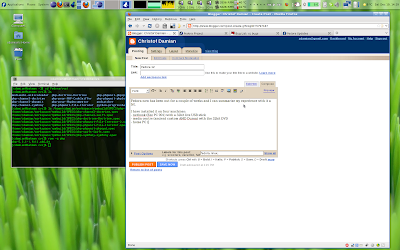