I always loved the idea behind OpenStreetMap. Mostly because of my open source experience and sites Wikipedia, these show that with enough people doing a little bit of work in the area they know, it is possible to create results which are better and more free than the conventional commercial offerings.

I remember the time in London, when we had our little start-up and needed location maps for our customers and couldn't find a good provider for this (there was no google maps or map24 at that time). So fools that we were we decided to write it ourself. We got the raw data on CD from TeleAtlas and one of our programmers got pretty far with a renderer. But before we could get anything useful map24 produced a much better version which we started using. But I always have been frustrated by the lack of open map data and open source renderers.

With OpenStreetMap this is now all in the past, the maps are up to the quality of the commercial services in many areas now and the renderers are very good too. In fact the maps are so good that I haven't really had a chance to contribute myself.

But now with my frequent trips to Tibidabo with the mountain bike and my GPS phone I noticed that the OSM maps for that area are full of white spots and are missing most of the hiking and mountain bike routes through the forest, but also some of the tertiary roads.

So I exported some of the tracks I had so far and uploaded them to OSM, this gives everyone working on OSM the chance to use these to create roads on the map. To do this I downloaded merkaartor, which makes it very easy to create roads and places and tag them correctly. There is a Fedora package available, so it was a very easy install. You can also use this to create maps even if you don't have a GPS yourself, just by using the yahoo satellite images or tracks other people made public.

Yesterday I did my first ride especially for OSM to trace some roads and tracks which I haven't travelled with the GPS yet. It took me three hours to ride 30km, which was a lot of fun.

One thing I found difficult is choosing the right tags for the roads and tracks. But it looks good at the moment and if it turns out to be incorrect it is always possible to change later.

Here is an image of the area I am currently working on it is the whole Park de Collserola, around the Tibidabo. I have traced most of the small dotted lines in the current target area and some of the residential and tertiary roads. You can also see the same map on openstreetmap.org. 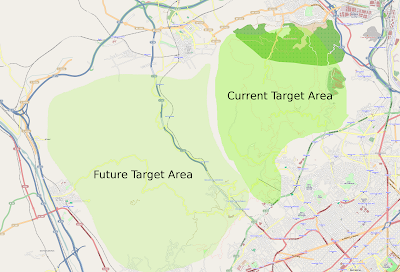 Turns out this is probably one of the perfect hobbies for me at the moment, as it combines open stuff, mountain biking and gadgets. Now I somehow have to get some programming in there too.
Posted by Christof Damian at 13:03 2 comments:

Another look at my New Year resolutions. I decided to do them every four months now, every three was a bit much.

loose weight
fail - I am doing more mountain biking and eat sensible, but I gave up on the gym. Working out with my N79 Active turned out to be a lot of fun.

use my motorcycle more
a little bit more use, small trips and some usage in town. Now I need to get a new ITV.

sort out my music collection
all done. Tapes and CDs are digitized and I got rid of most of the duplicates. Music from podcasts is still a mess, but that can wait for another day.

travel somewhere new
Success - We went to Cadiz for the summer holiday and also checked out Tarifa, Tangier and Gibraltar. I would like to do another weekend trip somewhere, either with the bike or a weekend plane trip.

do more programming
not much happening at work. I started the twitter / tractor top10 website, which was fun. I also took over some packages for Fedora and have two more on review. I also did some programming for the digitization of the tapes and little things on older projects. I would count that as a success.

take more advantage of Barcelona
Saw some arty film stuff, went to the beach more and took full advantage of Tibidabo. Also two trips to the cinema so far: Watchmen and District 9, which are both great. This week is Merce and soon the Air Show and the Red Bull Air Race.

blog more
a little bit better. I think once every two weeks is probably my rhythm :-)
Posted by Christof Damian at 14:17 No comments: 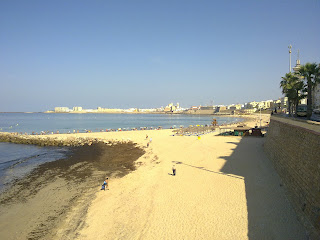 Last week Cat and I went to Cádiz for our Summer holiday.

It was just a week this year and we didn't really decide what to do this year until the last minute. It was either a motorcycle tour around Catalonia, France or a short flight to somewhere in Europe.

Because Cat likes the Atlantic and we had never been to the very South of Spain we decided to take the Trenhotel night train from Barcelona to Cádiz and rent a car there for a few days. We booked train and car and I also bought a backpack and some trekking shoes for the trip.

Because the booking was done in the last minute we didn't get a sleeper cabin, but the sleeper chairs are OK too. The train goes from Sants station to the centre of Cádiz. The first night we staid at the wonderful Hotel Argantonio , but because we didn't book we just had the room for one night. We had a look around the town and the next day headed south.

A lot of the coast of Southern Spain is filled with horrible new holiday homes and you won't find nice villages, but the beaches and the surroundings are rather beautiful. We stayed at camping sites, which were all nice and usually had access to the beach.

We as far as Tarifa and after a bit of sightseeing got the idea of taking a ferry to Tangier .

As it turned out you need a passport for this unless you go on a packaged tour, then an id card is sufficient. The tour was packed full of "shopping opportunities", like spices, gifts and carpets and other stuff we didn't really want. But because we didn't have a choice and Tangier is a nice place it was worth the trip. I would have liked some time to explore the city myself, but you would need more than one day anyway. One word of advice: if you enjoy the western tradition of toilet paper, you better bring your own.

The last day we did a quick trip to Gibraltar and then back north to a camping ground not far from Cádiz to make it easy to drop of the car and spend some more time on the beach and in the town.

Overall a very nice holiday, with a bit of everything and also a bit exhausting. I would do it all again, but maybe book the hotel earlier and go with the motorbike.

You can see more picture in my facebook album.
Posted by Christof Damian at 14:53 No comments:

Email ThisBlogThis!Share to TwitterShare to FacebookShare to Pinterest
Labels: holiday 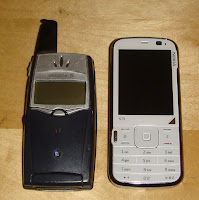 Recently I started using twitter, facebook and blogs more and I got a little bit annoyed that I couldn't update those sites with my mobile phone. And then my digital camera died on me, which resulted in no new photos by me in the last couple of months. The final point which made me want to get a new fancy phone was me getting lost on Tibidabo without a GPS.

My old phone is a Ericsson t39m, which is one of the best mobile phones ever made. It was one of the first phones with bluetooth and does stuff like email, WAP & T9. It also supports lots of accessories, like different sized batteries, different antennas, docks and travel chargers. It also pretty small and has a nice monochrome screen.

But there comes a point where you need a new toy and after looking at all kind of phones I finally came up with a list of requirements:
This ruled out pretty much most of the phones including the iPhone, which was out of the question anyway, because my recent experience with iPods and Linux.

At one point I discovered the Nokia N79 Active, which was announced beginning of the year. It also has one nice additional feature which is was the real selling point for me: it comes with a Polar heart-rate belt.

Buying one turned out to be a bit more difficult then I hoped. First it was just released in Finland, Sweden and South Africa, and not available on-line. It was announced in Germany, but the date got pushed back every month until they finally took it off their website. Then it got released in the UK and was available on the Nokia on-line shop, but they obviously don't deliver to Spain. Finally a friend of mine in the UK ordered it for me and forwarded it to Barcelona.

Now I have it since a little bit 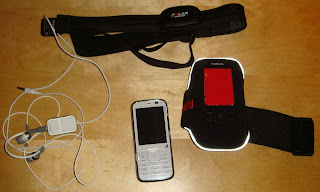 over a month and are fairly happy with it. I use it every day as my phone, for photos, web browsing and twittering.

Together with the Nokia Sportstracker website and software it is also brilliant to track your sports activity, which is in my case mainly cycling and mountain biking. Here is the information about my last long ride on Tibidabo: 4h on Tibidabo

Here are some other things I like about it:
And some stuff that is rubbish
Overall I am happy though, because I had rather low expectations as most mobile phones I had in my hand in the last couple of years were pretty rubbish. Except of the iPhone, which had the first good user interface for phones since the rotary dial, but it just was not right for me.
Posted by Christof Damian at 20:20 No comments: