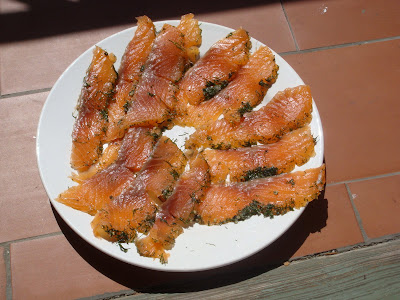 Simple gravlax recipe:
cut dill, mix with salt and pepper. Put one piece of salmon skin down on large bit of cling-film. cover with the mix, put other salmon on top. wrap everything tight in cling-film. Off into the fridge and put something on top to weight it down.

Now the difficult bit: you have to wait at least one, better two days and turn it every once in a while.

Nice and easy snack for the summer.
Posted by Christof Damian at 22:55 No comments:

Email ThisBlogThis!Share to TwitterShare to FacebookShare to Pinterest
Labels: recipe

The Big Digitization Of Cassette Tapes 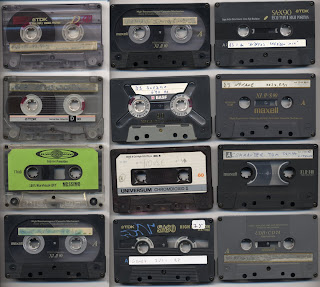 Today I finally finished digitizing all of my techno and house cassette tapes. It took me a little bit over two months. Here are some statistics:
I probably still have some tapes flying around somewhere and my girlfriend also has some, but the vast majority of my music is digitized now. The music is mainly mixed techno and house DJ sets, from my friends like DJ Gomez, Motik and Nitin. A lot of sets are recorded from radio like HR3/HRXXL and Hithouse Stuttgart and in clubs around Stuttgart and Cologne. The most popular DJs are Sven Vaeth, Roland Casper, Richie Hawtin, DJ Hello, Dag, and Laurent Garnier.

I used my little python tapetransfer script, which I wrote for this purpose. It basically waits until there is music and then records until there is a longer break, which is perfect for DJ mixes and rubbish for normal music CDs. I recorded everything with the same level, which means that some tapes are really quite now, but the alternative would have been to play every tape twice. If it turns out that some tapes are too quite I will record them again in 32bit and normalize. I probably write another script to find out the level of each wav file.

In the end it didn't take me as long as I expected, I usually managed to do one tape before work and maybe three in the evening and a bit more on the weekend.

All that is left now is converting them to flac and mp3. The files have to be tagged and named more consistent. Another idea is to also scan pictures of all the tapes and add this to the music files.

And listening to all of them again, but I already found some real gems.
Posted by Christof Damian at 15:01 6 comments: