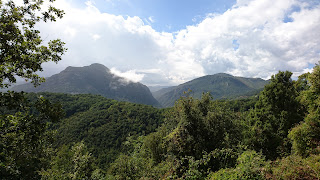 Amazingly this is the first multiple day cycling trip that I have done alone so far. I had the weekend for myself and decided to use it to explore some new roads in Catalonia.

After asking my cycling friends for some tips I decided on using Ripoll as a base. It is a two hours and €8 train ride from Barcelona and surrounded by nature parks and nice mountains.

I found a reasonably cheap Airbnb, which I booked from Friday evening to Monday.
I had been warned by the host that the stairs are steep, many and without much room to move a bicycle. And she was absolutely right. I still managed though and otherwise the flat was really nice, with a washing machine (!) and fully equipped kitchen. I cooked every day and basically lived on pasta.

I had picked some routes before, but decided on the day which one to pick. The weather turned for the worse and it was a bit colder than I expected. I am not an early riser anyway, but in this case I waited until 10:00 to start each ride so that it could warm up a bit. In the end I only got into the rain once though.
Many thanks have to go to Mauro to helping me with the routes and suggesting the area in the first place.

I decided to this ride first, because it was relatively flat and I was expecting rain. It started to reain just after Olot and continued for another two hours. I was glad that I had bought some of the gear that kept me warm (see below).
A very nice ride on mostly quiet roads, lot of nature and nice climbs. In Olot I also climbed the volcano, which has a little church on top.

It warmed up a bit so I went a bit higher and to the west. The main goal was La Molina, but the highlight was Montgrony, with basically no cars and great views. The climb was also nice and the only place where I saw some other cyclists.
In Catellar de n'Hug they do gigantic croissants, but they were a bit big for just one person. Maybe a nice snack in a group.
The return via Toses was equally nice, small single lane road winding down back to Ripoll.

I packed up and made myself on the way to Girona to take the train from there. I expected it to get a lot warmer, the forecast was 28C for Girona, while it was only 10C in Ripoll in the morning.
I picked a tiny agricultural road that winded its way to Olot. I had checked some of it on Streetview before, just to make sure it was really a road. It was quite rough, most of it was concrete and not asphalt, which made it slow.

But the nature was nice, lots of cows, sheep, horses and birds of prey. No traffic at all.
I had to stop for water in Vidra, which was the first fountain I saw.
There might be a nicer way from Olot to Girona, but this was OK and for a Monday the cars were not too annoying.

I might be imagining it, but the drivers around this area seem to be especially nice to cyclists. And they are already pretty nice in the Barcelona countryside. In Girona they are as bad as in all the cities though.

I kind of went the bike-packing route again. I used a large waterproof Ortlieb saddle bag, a small Decathlon 13€ handlebar bag and a small sports bag on my back.
I had a set of cheap clothes for walking around in town that I disposed of in Ripoll (Our cycling group calls it "Decathlon gift bag"). With all the other things that I used up on the trip, like energy food and sun screen I was able to also leave the sports bag.
For the first two days I used my small saddle bag, which I had brought in the Ortlieb one. And on the last day going to Girona just saddle and handlebar bag. I can't stand cycling longer distances with something on my back.

For this trip I also used some new gear, which turned out to be great.

Oakley Radar EV Path Photochromic - my first photocromatic glasses. I mainly bought them for the autumn and spring where I tend to cycle to work in the sun and home in the sunset or night. Until now I had another pair of Oakleys with a few sets of lenses and I swapped them during the day. This is obviously not ideal.

This pair also only has a half frame, which helps with ventilation and makes it easier to look down, for example at the GPS.
I still have to get used to how light they are, sometimes they feel like they are slipping up because there is not enough weight on my nose.

Sportful Fiandre Light NoRain Arm Warmers - arm warmers, you can't really go wrong, they are all more or less the same. These ones are in neon yellow, windproof and a bit rain resistant.

Castelli Perfetto Light Short Sleeve Jersey - I have been looking for something like this for ages. A jersey you can wear directly on the skin, with the usual back pockets, usable in warm conditions, windproof and reasonable water resistant.
The most know option is the Castelli Gabba, but from what people say it is really for colder weather and when it is really cold I wear a long sleeve anyway.
The Perfetto worked perfectly. I used in in temperatures between 10C and 25C, in the dry and in torrential rain. It did keep me dry all the time, it didn't feel to warm and on the long and cold descents it kept me comfortable.

Posted by Christof Damian at 20:59 No comments: