UPDATE: I posted a followup to this, with information about the new software and API and now highly recommend the Bloomsky Station

The Bloomsky "Weather Camera" is a weather station with built-in camera. 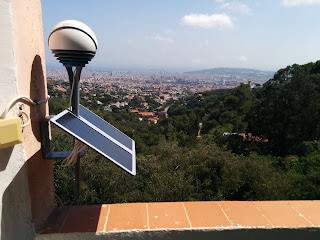 I first saw it on a Kickstarter Campaign, which was pretty successful. I snapped one of the early birds deals and later added a solar panel.
Expected delivery was December 2014 (ha!), it turned up in August 2015. But this is already better than some other campaigns. They had some problems to get the CE approval for Europe, so that explained some of the delay.

It is advertised as "5-in-1 weather station + HD camera that captures real-time weather data + sky image at your location. Next Generation Weather Network.".

The hardware is really nice designed, from the station itself, the solar panel and even the stake/brace to put it up somewhere. I am glad I got the solar panel, it means I do not need any cables coming from the station and at the moment it seems to function really well and never drop below 50% charge, which might change in winter.

When it arrives you have to set it up with a Android or iOS app, to connect it to your wireless network. The app uses wifi itself, so there is no kind of bluetooth support. I had lots of problems with the Android app at the time, because it was buggy and the setup process is not very reliable. In the end I borrowed an iPhone and after a few tries and reboots of the station it worked in the end.

The mobile app is also the only way you can access the station, it shows the current data and photo and you can view time-lapses from the five previous days.
It also tries to be some kind of social weather network, where you can browse, like and follow other Bloomsky stations.


Now the bad part: this is not a weather station and it isn't a web cam either.
A weather station should give you access to historical values for the sensed metrics (temperature, pressure, rain, uv and humidity).
And a web cam should do the same and has to be available on the net.  I can't even share a web address with my friends to show them the view of the camera, they have to install this mobile app first.


There is no API either, nobody will be able to add these features in the near future. All data is uploaded from the station to Bloomsky servers and fetched from there by the app. If the company goes bust, which is quite likely for a start-up, then the whole hardware will be a useless brick.

To summarize: at the moment this is a nice toy with brilliant hardware and rubbish software. 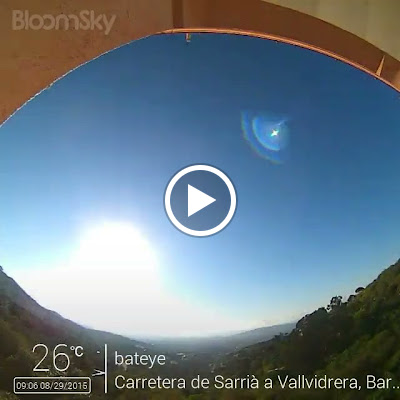 Posted by Christof Damian at 20:56 No comments: