Spaghetti with clams and aioli 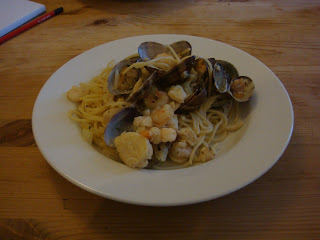 New recipe for me, inspired by something I saw Rick Stein doing in some cookery show.

Put clams in a hot pan, add a cup of white wine. Cover and cook until they opened. Drain with a colander, but keep the liquid. Discard the clams which did not open.

Put some spaghetti or tagliatelle into a pot with boiling water and cook according to package instructions.

Meanwhile put one sliced onion and some sliced garlic into a pan with olive oil and fry them until soft. I added some small and medium peeled prawns and some leftover cod pieces. Then add the clams with shells and the white wine liquid you kept. Finally add some aioli. Season with salt pepper and herbs.

Reduce this a little bit. Add the pasta straight from the other pan and stir until it is covered.

The result should be creamy with not too much liquid.

Posted by Christof Damian at 19:38

Email ThisBlogThis!Share to TwitterShare to FacebookShare to Pinterest
Labels: recipe