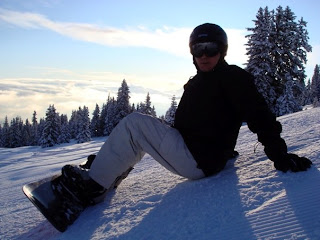 Yesterday Cat and I returned from our week long snowboard trip to Laax.

First we flew to Stuttgart and visited Marion and Bernd in Balingen, where we met up with the other guys who took us by car and van to Laax. The weather on the way looked a bit disappointing, with not much snow until the last corner to Laax.

We were staying at the same hostel as last time, it is the Mountain Hostel Laax. It is situated in the middle of the ski area at the first stop of the cable car. The accommodation and food is basic, but you don't really need much more anyway. This time we had a two bed room, which was a lot nicer than the sharing with four people of last year. The room could have done with more changes of towels or linnen though.

But the main disappointment of the holiday was also related to the Hostel, because there was a very relaxed attitude to property rights. During our stay my iPod Classic 160GB and a Sony digital camera got stolen out of our rooms and a pair of new snowboard boots from the hallway. For the iPod and camera I suspect the cleaners, because they vanished on the day brought new towels and the rooms were locked all the time. The boots got stolen during the night, so it must have been one of the employees or hostel guests, as nobody else can come or go at night time.

But now to the good bits. The weather turned out to be brilliant, the first few days we had non stop snowfall. This meant the visibility was not that good, but the snow was perfect and I discovered how much more I love deep snow and freeriding compared to prepared slopes. During the week there also no queues at the lifts which are perfect conditions for stressless fun. At one day there was also a lot of fog, which reduced the visibility to about 10 meters, but even that was fun.

I used the week to work on my snowboarding and I am a lot quicker now. I also learned turning 360 degrees while riding, riding backwards and 180 while riding slow. Cat also found a little kicker to do small jumps just off the slope. Cat is still quicker than me, but I can always blame the age difference. And I didn't break anything this time - brilliant!

I would love to go boarding again this year, but I am to broke to afford another week. And now I also need to replace the iPod and my own broken Sony camera.

Cat and Rafael have put some pictures on facebook, so check there.

I also managed to read some books while on holiday:

Posted by Christof Damian at 19:22