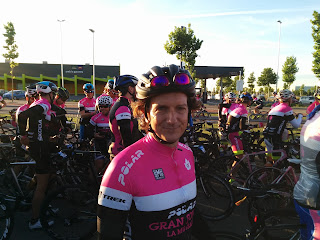 Last year I attended the the Gran Fondo La Mussara, it is a great event, well organized and with a beautiful route.
Sadly I was not able to finish it. I had to give up after 110 of the 189 km. I was not properly prepared due to various injuries and illnesses in the beginning of the year. And I got another injury during the ride.
But I decided to give it another try this year, so I registered early as this event sells out pretty fast.

Registering early including an hotel turned out to be a problem. The hotel forgot all registrations and notified the organizers with one week to spare. Luckily I found another hotel, which turned out to be a bit more expensive, but much better. It is just one kilometre from the start, has really big rooms, you are allowed to take your bike to the room and they organized a special early breakfast for the riders. So if you are in the area I can highly recommend Brea's Hotel, maybe not for a romantic weekend, but for riding or doing anything at the Fira it works out brilliantly.

Another fun bit this year was the panic about disc brakes at sportives in Spain. Luckily this got sorted out beforehand and doesn't affect my events this year. But I won't be registering for any others until this is settled for good.

The Gran Fondo is a very well organized event. The start and finish line is at the Fira Reus. This is also where you pick up your race pack, jersey and the pasta party after the event is held.
The race pack contains your start number with timer chip, a booklet with all kind of information about the race, one very useful sticker for your top bar with the food stop locations, one sticker with the height profile and some energy food.

The jersey was the one let-down. I generally don't like to be forced to use the jerseys provided by the sportive, and this time it really showed why. It was much too small for everyone and the quality was really bad. The zip didn't work well and got stuck all the time. As this was probably the cheapest version of Santini jerseys it also only had three smallish pockets. I can't see anyone of the 5000 participants buying from Santini in the future.

The problems I identified last year were: 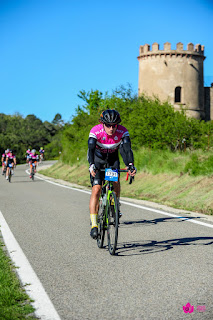 I avoided injuries before the race this time and whenever something did hurt I made sure I rested enough and left the bike at home.
My strategy for avoiding the bonk in this year was to start with enough energy. This meant mainly eating lots of pasta in the three days before the event. Maybe twice as much as would typically eat.
For food during the race I packed 10 of my preferred energy gel and four packs of power for energy drinks to avoid the food station food. I only stopped to stock up on water.
I also set the alarm on my Garmin to 20 minutes and 300 kcal to remind me to eat and drinks.
To avoid injuries during the race I stayed in the saddle most of the time, which is easier on the knees and tendons and I set a heart rate maximum alarm on the Garmin too.
All of this worked out pretty well. I arrived at the finish line with energy left and without pain. Very tired though.

After the race I had my protein shakes prepared and in the evening I was fit enough to check out Reus and have dinner there.


We spend the night in Reus and went back late Sunday, after checking out a village food and wine fair that I noticed them setting up on the day before. Very typical Spanish with a monster Paella dish.

I am probably not doing this Gran Fondo again, as the route seems to be the same every year. But I can highly recommend it. Even the small one with 89 km is a very nice route and gives you most of the experience without killing yourself. 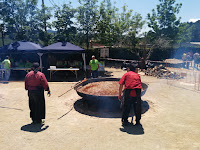 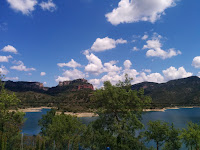 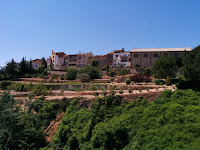 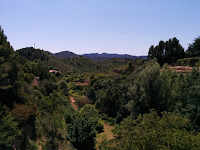 Posted by Christof Damian at 12:14