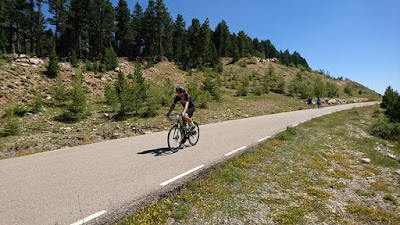 Mauro talked me into taking part in the La Ruta Minera sportive, conveniently he broke his collarbone before and didn't join.

On paper this looked like a lot of fun. It is a bit shorter than Gran Fondo La Mussara and a "bit" more climbing.

The event starts and finishes in Berga, which is an hour away with the car. There is no good rail connection, so I rented a car for the long weekend.
I booked a hotel through the sportive organisation from Friday to Sunday, with the race being on Sunday. The Hotel HCC Ciutat de Berga was nothing special, but the front desk was very friendly and he did the sportive last year. He even checked out my gears to make sure I was not trying with a 11-25 cassette. They allowed bikes in the rooms for this weekend and also provided extra early breakfast and late checkout on Sunday.

Saturday was for relaxing and sight seeing. The old town of Berga is pretty and for the nerds they have the only Free Software Street in the world.

Sunday the race. I felt good. I had stuffed myself with pasta the previous days. I had water and gels. The bicycle was mostly OK (some problems with the bearings in the front wheel). All systems go.

Maybe the uphill start should have given me a clue, but the temperature was nice and so was the landscape. The first climb was easy to manage around 600m of climbing. But the second one already took most out of me, 1000m of climbing with one ramp of 23% gradient.
Distance wise this was only the halfway point and lots of climbing remained.

Before the next big climb the temperature went up to 37C with nearly no tree coverage. On the last hill the heat took everything out of me. I stopped a few times in the shadow just to cool down again.

The finish line obviously was also a climb. Overall there were only two sections that were flat and allowed me to slipstream a bit.
That my descending sucks also didn't really help.

But ... I did finish and it is a beautiful area of Catalunya. The organisation was also lovely, it felt like a big family. There were less than 600 cyclists taking part, which is a lot less than my previous sportives.

I am probably not going to try this again, but will visit the area when it is a bit cooler :-)

Some more photos in my google photo album.

Posted by Christof Damian at 18:53