The year comes to a close and it is time to see what happened to my New Year Resolutions.

Well, this didn't go so well. Overall I managed about every second day, though I have done most of it in the first half of the year. But it turned into a habit now, so I tend to do it a few times a week.

I managed to do quite a few and had fun doing them.

Draw something every day

This turned out to be pretty much a failure. While it was going good at the beginning of the year I just gave up after a while. It was just impossible to find the time or inspiration to draw.

Blog once a month

Nearly...this should be number 11 for the year.

It was a difficult start, but then I found some easy to read thriller series and space operas and ended up reading 23 books.

During the year I picked up a few more smaller goals and habits where I have been more or less successful. 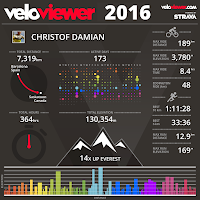 I had the cycling goal of reach 8000km for the year and achieve all Strava Climbing and Gran Fondo challenges. But an illness in December made this impossible. So I just got 11 of the 12.

I also started to do Vegetarian Mondays with a 64% success rate. I found it difficult when traveling or when there were social events.

I worked on my Spanish with Duolingo for most of the year and finished all the lessons. You have to keep it up though so you don't loose it again.

And I reached my goal weight. The remaining fat has somehow to be replaced by muscles.

I haven't quite decided on anything yet, but I definitely take it a lot more easy :-)
Posted by Christof Damian at 21:44